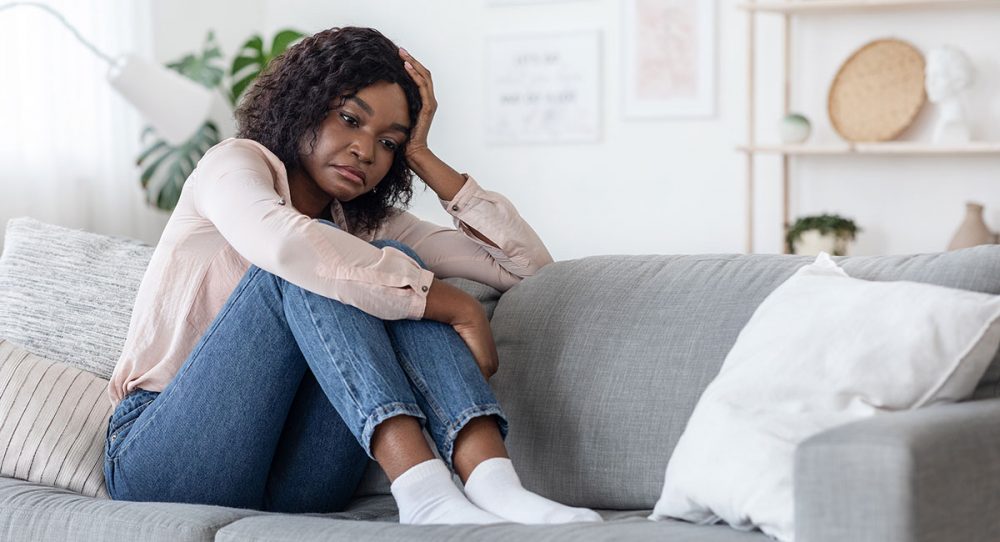 An abundance of care is provided to women when they are pregnant. As a vessel for human life, pregnant women are placed under the microscope for the better part of nine months, only to be released after labor and delivery. But what a person goes through to bring life into this world is no small task, and while a mom’s immediate physical needs are met in the hospital, her mental health is often never properly evaluated. A mother’s mental wellbeing is all too often overlooked when it should be a primary concern and focus for several months after she has given birth.

Gabrielle Yarborough first noticed a change within her mental health when she returned to her job three months after her daughter, Emerson, was born. “Two weeks into work, and I thought I was doing great, until I wasn’t,” Yarborough recalled. What started as migraines manifested itself into a panic attack that forced her to seek professional medical attention. “I loved my job, but my routine was now all about the baby, work, shower, repeat — and honestly, personal care, I realized, had stopped too,” Yarborough explained. She didn’t want to notice the signs within herself, but, looking back, she is able to see just how challenging the immediate life change was for her mentally. She remembers being asked only at her six-week obstetrician appointment if she was “OK,” to which she said yes, and she was never mentally evaluated again.

“I don’t know exactly what can be done to give moms more resources for mental health, both post birth and all the time, but more should be done,” Yarborough said. “So often when we become mothers, we lose our identities, and if we are not our healthiest, best selves, eventually all the walls fall down.”

Later, Yarborough saw her general practitioner and was evaluated and issued a treatment plan for managing her PPD/A. Today, she shares her story with as many people as she can to help create an awareness for the importance of mental health in mothers. “We need to make sure we take care of ourselves first and foremost and then our families,” she affirmed.

Jenna Petelle Arsneault, mother of two, said she struggled with postpartum depression and anxiety after the birth of her first son. “I didn’t think too much about the possibility of having PPD/A before he was born,” she confessed. She mentioned noticing a change within herself while still in the hospital, and, over the course of the next few weeks at home, her depression, which stemmed from a plaguing fear of losing her child, really began to set in. “My symptoms worsened over the next couple of months until I was feeling totally helpless, hopeless, unable to eat or sleep and stopped caring about showering or getting dressed.” Arsneault recalled.

At the time of her first son’s birth, she worked for a home health agency that strongly encouraged her to place her mental health first and seek professional help immediately. “Once the pressure of going back to work was off, I admitted to myself that I was experiencing more than normal new mom stress and needed some help,” Arsneault explained, after which she struggled to find appropriate help — PPD/A counselors’ schedules were fully booked. She saw a psychiatrist who she felt was dismissive of her concerns but who referred her to another psychiatrist.

Eventually, she was prescribed the appropriate medication to better endure the stressors she was facing daily as a new mom. Once fully acclimated to the medication, Arsneault’s mental state significantly improved. On the other side, she explained how she wished she had known how common PPD/A was before her son’s birth. “Because of this, I’ve made it my mission to be open about my experiences and get the word out about postpartum mood disorders,” Arsneault explained. “I make sure to talk honestly with pregnant women about what they might face and that it’s manageable with the right support. I’m trying to help break down the stigma around it.”

Just last summer, Arsneault saw a Facebook ad for Postpartum Support Charleston, a local nonprofit that supports mothers struggling with postpartum depression and anxiety, and reached out to start volunteering her time. “Living through postpartum depression and anxiety had a profound effect on my life. It really changed me and made me want to help other new moms through it. I could’ve used that support when I was going through it myself,” she said.

Elaine DeaKyne, board member at Postpartum Support Charleston, addressed the current insufficient care and concern for a mother’s mental health post labor and the negative effects of neglecting to identify a need for intervention. “Our society should value both the physical and mental health of a mother. A mother’s health really is vital to the growth and development of the child,” DeaKyne stated. “A healthy mom equals a healthy baby.”

A mother herself, DeaKyne suffered from postpartum depression and anxiety after the birth of her oldest daughter. “When she was 2 months old, I reached out for help and found Postpartum Support Charleston’s support groups. Finding this organization gave me support by showing me that I was not alone.”

While support for PPD/A is without a doubt a necessity, one’s ability to identify symptoms and locate the appropriate support are two issues that general awareness may help eliminate. “It can be extremely difficult for a mom to say, ‘I am sad, I am anxious, and this is overwhelming,’” DeaKyne noted. “We try to help mothers understand that PPD or PPA is an illness. It is not a reflection of who someone is as a parent. Mental illness is very real, and it is also very treatable. We still talk to moms after their recovery who say, ‘I wish I had known about you when I was struggling.’ So, we do still have work to do to get the community more involved in helping us reach more moms.”

“There are approximately 10,000 births every year in Charleston, and we want to make sure all of those moms know that PPD/A is an illness that one in five moms will suffer from — but there is help, and PPD/A is a completely treatable illness. No mom has to suffer in silence,” she added.

Rebecca Imholz, Director of the Mount Pleasant Chamber of Commerce talks with host Brian Cleary about the 2nd Annual Dine Where You Live Campaign which is a proactive reaction by Mount Pleasant to … END_OF_DOCUMENT_TOKEN_TO_BE_REPLACED

For many of us, April 18 represents a looming and ominous deadline — Tax Day. Be it dread of the unknown, anxiety over how to navigate a complicated process, panic about penalties or stress about the … END_OF_DOCUMENT_TOKEN_TO_BE_REPLACED

Retiring from the fourth largest municipality in .the state of South Carolina after nearly 24 years of heading the Town of Mount Pleasant’s communications office is a momentous occasion for me. … END_OF_DOCUMENT_TOKEN_TO_BE_REPLACED