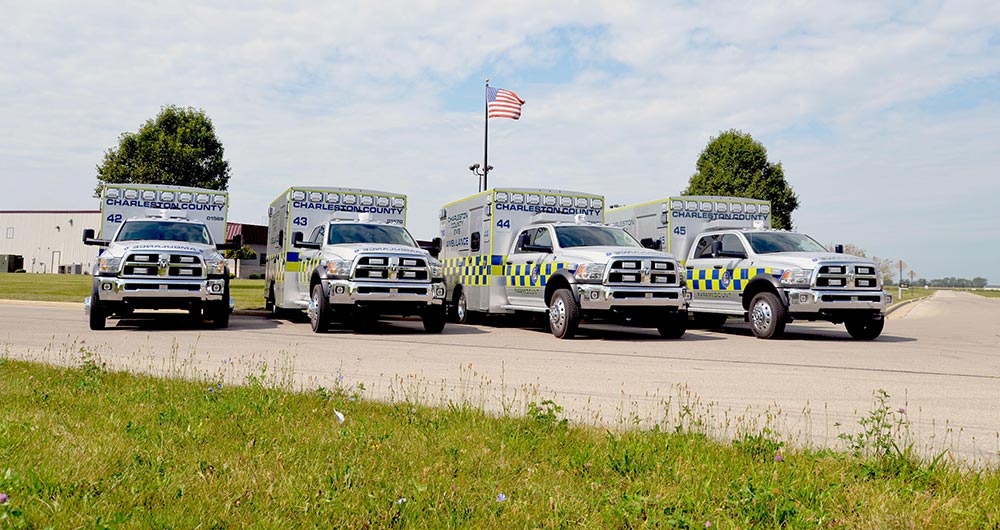 The Emergency Medical Service (EMS) of Charleston County provides assistance in medical situations and transports patients to hospital emergency departments. Heart attacks, gunshot wounds and traffic accidents are their stock-in-trade but slip-and-falls are right up there, too. This is a service — often a lifesaving one — that we don’t give much thought to until we need it.

Up until 1973, local emergencies were serviced by funeral homes and a couple of private ambulance firms, shared EMS director David Abrams. That was the year that a group of local physicians, citizens and members of the Charleston County government created EMS. The EMS operates in partnership with Fire Department first responders, who work to stabilize patients until EMS professionals arrive.

With the recent meteoric population growth in the county to over 420,000 residents, including many retirees, the service has been overstretched. At times, the crews have had to live on the trucks for up to 13 hours a day, grabbing takeout lunches at spots like Harris Teeter.

The great news is that the County Council recently voted to increase the EMS budget by $2.86 million in extra funding to hire 44 full-time workers, add four new ambulances, upgrade the present vehicles, add cardiac monitors and give a pay raise to paramedics. This will help with quicker response times, said Abrams. “For the most serious calls,” he said, “we try to hit 11 minutes.” That may sound optimistic since the vast region the service covers is 1,358 square miles, stretching from McClellanville in the north all the way down to Edisto, including several rural pockets.

Besides medical training, the jobs of paramedics and medical technicians require quick thinking, often in tense and occasionally quite dangerous situations, from domestic violence to shootings. The 911 dispatchers determine the severity of the situation, and they recommend callers stay on the phone until the dispatcher concludes what is needed.

“It’s a tough job,” said Carl Fehr, director of EMS recruitment and outreach, adding that there is a nationwide shortage of paramedics. “We want to recruit more,” he said. The EMS hires about 45% of applicants. The individuals have to be both competent and caring.

Fehr said that in the Lowcountry, interested folks can receive free or subsidized education for careers in health and public safety at Trident Technical College in North Charleston or one of its branches.

Retired Mount Pleasant boat captain Jerry Zimmerman told of his recent experience with the EMS. He said he was in the waiting room at a veterinarian with his dachshund Daisy when he started feeling quite faint. The vet cardiologist rushed out to check on him while the staff called 911. First the firefighters arrived and stabilized him, recounted Zimmerman. Then, the EMS paramedics trundled him into their ambulance-truck and took him on “a bumpy ride” to the Roper Hospital emergency room. And what about little Daisy? The veterinarians took care of the pet until Zimmerman’s wife could come get her. Fortunately, after several tests in the ER, which found nothing amiss, he was sent home.

Abrams said that trip-and-falls are one of the most common accidents that EMS encounters with both locals and visitors. Downtown Charleston’s sidewalks are notorious, of course, but he added that throw rugs at home are also risky. Bathrooms are prime locations for falls, though grab bars and handrails can help.

Special operations teams are called in where the patient is in an inaccessible or dangerous location. Bike teams are used at large events like the Cooper Bridge Run where an ambulance can’t get access. You can spot them in their yellow shirts and black and white helmets. These capable medics can make the difference between life and death.

For many of us, April 18 represents a looming and ominous deadline — Tax Day. Be it dread of the unknown, anxiety over how to navigate a complicated process, panic about penalties or stress about the … END_OF_DOCUMENT_TOKEN_TO_BE_REPLACED

Retiring from the fourth largest municipality in .the state of South Carolina after nearly 24 years of heading the Town of Mount Pleasant’s communications office is a momentous occasion for me. … END_OF_DOCUMENT_TOKEN_TO_BE_REPLACED

Perhaps you’ve noticed it as you’ve turned off Highway 17 onto Mathis Ferry Road, just past the first traffic circle. More likely than not, you haven’t paid it much attention. But that’s about to … END_OF_DOCUMENT_TOKEN_TO_BE_REPLACED