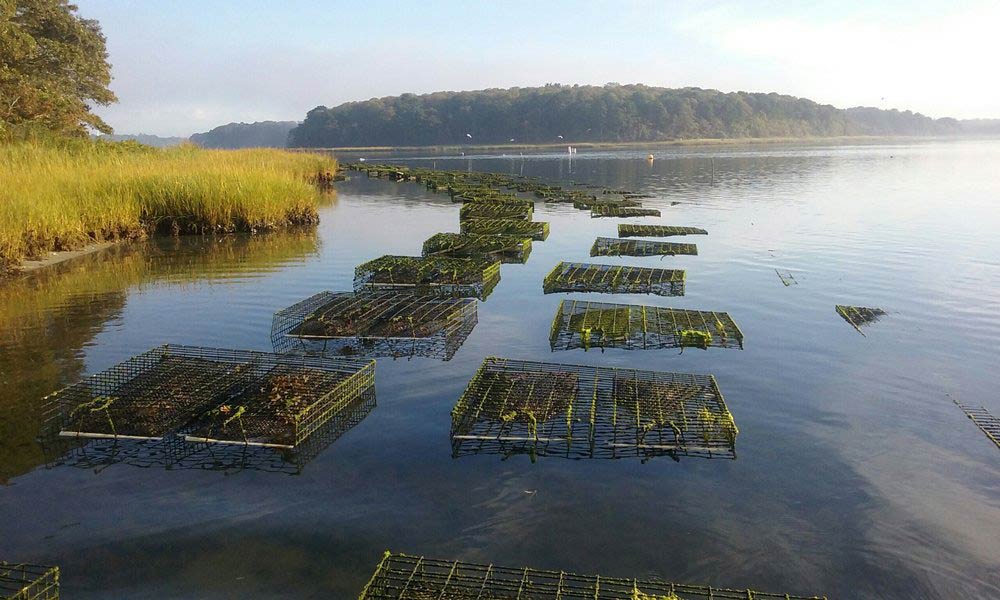 Charleston is a seafood destination, and oysters comprise one of the most popular menu items in area restaurants. Not to mention that oyster roasts are almost a rite of passage around these parts, with seasonal events bringing people together over their love of this meaty mollusk.

But how does supply keep pace with the increased customer demand for these briny bivalve delights while not depleting wild oyster populations?

The answer is oyster farming. Oysters have been raised and harvested since first century BC in the Roman empire, and this aquaculture practice — the cultivation of aquatic organisms for food — continues into the present day.

While still not a large industry, oyster farming is growing fast in South Carolina. According to the South Carolina Department of Natural Resources, the number of farmed oysters in the state rose from 139,178 in 2014 to more than 1.2 million in 2019 — COVID-19 reduced numbers a bit in 2020. Additionally, oyster farms reported selling $645,423 of oysters to local restaurants in 2018.

Charleston Oyster Farm, located along Green Creek near Folly Beach off the Stono River, uses a floating cage method called off-bottom cultivation, the culturing of oysters in which they are kept above the bottom of the river floor. Owner and Oyster Grower Thomas Bierce launched the business in 2015, collecting his first harvest in 2016. Bierce gets his oyster seed from a hatchery, allowing his crew to harvest oysters year-round.

Bierce, who studied marine science and coastal geology at Coastal Carolina University, said that it generally takes anywhere from one to two years at a bell curve to grow oysters to a size, approximately three inches, where they are ready for market distribution.

However, local restaurants are often wanting a smaller size than the three-inch oyster, which is why oyster farmers can also obtain an undersized permit for distributing oysters under three inches, known as petite oysters.

Unlike wild-caught oysters, farmed oysters can be distributed year-round. You may have heard reference to an oyster “season” in South Carolina, which applies to wild oysters only. SC DNR lists the recreational shellfish harvesting season as Oct. 1 through May 15.

One reason why wild oysters are not harvested during summer is the air temperature — they can bake in the scorching sun, explained Bierce. Aquaculture cages used in oyster farming keep oysters submerged and away from the heat.

There are different regulations for summertime harvesting though, and temperature controls are much stricter, he asserted.

An oyster’s flavor profile can vary based on where they are grown and the distinctive characteristics of the water. One reason Bierce chose Green Creek is because it is a tidal-fed estuary with twice daily high and low tides. The salty water makes their oysters briny, but he said they also deliver a “sweet, buttery finish.”

Oysters get their nutrients out of the water, so the tides are what is feeding the oyster. Therefore, farming oysters expedites the growing process, remarked Bierce. “Oysters never have to stop feeding with aquaculture. They’re always in the most optimal growing zone.”

As filter feeders, oysters serve an important ecosystem role, naturally cleaning the water. One adult oyster can filter up to 50 gallons a day.

Furthermore, oyster beds provide habitat where juvenile fish and crustaceans like to hide and feed, which in turn creates foraging areas for birds, raccoons and other animals, making them a vital link in the coastal food web, noted Bierce. Oysters also help stabilize the shoreline. Bierce is particularly interested in oyster reefs’ ability to protect coastline.

“We’re really trying to get into the restoration aspect of the industry,” he said.

Bierce called oyster farming a “win-win” for the environment and the economy, as aquaculture helps remove pressure off of our state’s wild oyster resources in meeting rising market demand for single local oysters. “There is more and more demand. If we can’t produce them here in South Carolina, then we have to get them from out of state.”

He added that we are “perfectly capable of growing our own oysters,” which provides the ancillary benefits of creating jobs and “promoting our local region.”

Bierce maintains that one reason why South Carolina hadn’t previously needed a robust aquaculture industry is due to our healthy wild oyster population. While other states have “decimated wild stocks,” South Carolina has been “pretty lucky” by comparison. But we must recognize this and not get complacent, he cautioned.

“To continue the tradition of harvesting wild oysters, we have to mitigate demand in order to sustain it.”

Click, Listen, Watch & Learn. Doug Holmes, "The Stats Guy" crunches and studies statistics in many fashions including the MLS in Charleston talks with host and publisher Bill Macchio about the 2022 … END_OF_DOCUMENT_TOKEN_TO_BE_REPLACED

John Powell, CEO and President of the Southeastern Wildlife Exposition (SEWE) talks with host Brian Cleary about the expo's art show featuring local and regional artists, and Powell talks about other … END_OF_DOCUMENT_TOKEN_TO_BE_REPLACED

I’m sure you’ve heard the saying, “a picture is worth a thousand words” or “it takes a village.” Both of these popular expressions apply to the journey I recently embarked on, which culminated on … END_OF_DOCUMENT_TOKEN_TO_BE_REPLACED