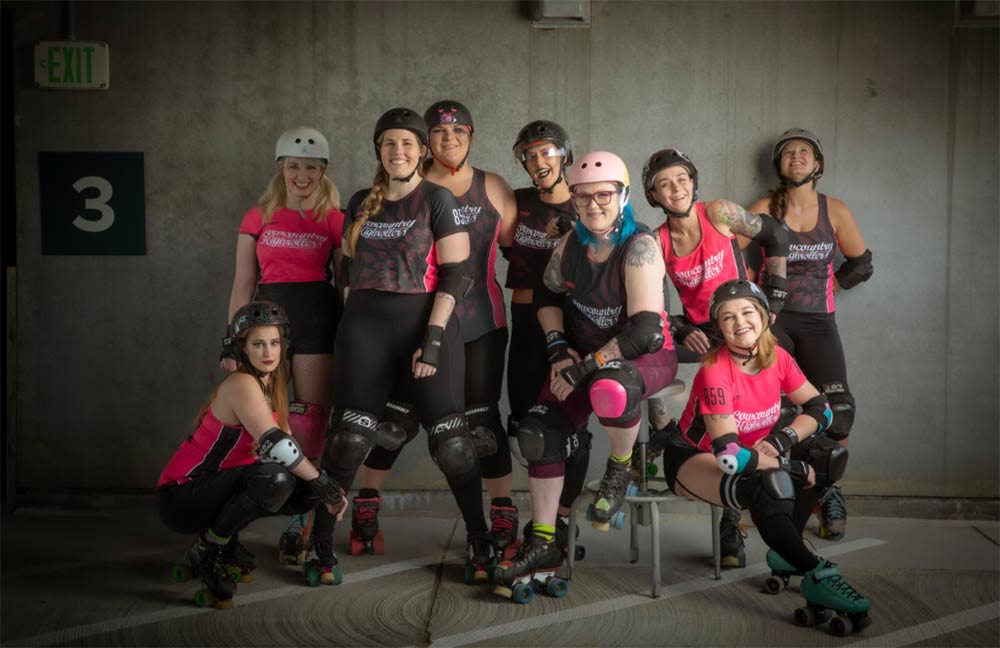 Roller derby dates back to the 1930s, but the sport had its heyday in the 1950s and 60s as one of the most-watched events on television. At its origins, roller derby for men and women resembled a marathon more than a tournament. It was solely for entertainment and a spectacle, with much of the interaction between skaters reportedly staged.

The sport lost its novelty in the 1970s and was all but extinct until a group of women in Austin, Texas decided to revive roller derby in the early 2000s. The women were looking for a sport they could make their own, a way to celebrate women and strength. Today, roller derby is an international sport known for its intensity, fierce competition and female empowerment.

The Lowcountry Highrollers got their start in Charleston in 2008. Current President Traci Doutaz was a skating car-hop at Sonic in 2012 when a friend suggested she try out for roller derby. “I had never seen or heard about it, so I went to my first game to watch,” said Doutaz, also known by her derby name Doutaz Mania, or #859. “I was instantly hooked. I have always loved skating and was involved in competitive sports, so it was perfect for me,” she recounted.

Not all members of the Lowcountry Highrollers grew up skating or particularly athletic. Many haven’t skated for years before becoming “fresh meat,” the term given to new members. “That’s what makes roller derby such a great sport,” asserted Doutaz. “Women just have to be at least 18 years old and able to put on skates to join our team.” The Lowcountry Highrollers train all recruits to skate, block opponents from passing, check opponents to make way for their team and even how to safely fall and get back up when taking a hit. Slowly but surely, they watch as “freshies” grow in confidence, strength and ferocity.

Many of the members of the Lowcountry Highrollers are moms who found their way to roller derby when looking for a break from the demands of work and motherhood. “After years of focusing only on my family and career, I was looking for an outlet,” admitted Katherine Bergmann, a 40-year-old senior communications manager who goes by Kat Katalyst, or #22, on the track. “I was never really into the traditional workout and found out about roller derby by chance meeting at a friend’s birthday party. I showed up for practice and was hooked! Initially, I had some mom guilt, but it didn’t take long to realize that taking a few days a week to focus on filling my cup was good for the whole family. What started as a fun way to stay in shape and meet new people quickly evolved into a passion for skating and a love of healthy competition,” she said.

Women of all ages, backgrounds and professions are drawn to the sport because it allows them to let their hair down, so to speak. Derby girls often develop an alter ego with a specific derby name, which allows them to disconnect from their day-to-day responsibilities to practice with the team, serve on committees that keep the team organized and funded and play bouts, or games, against other derby teams.

Before the pandemic, the Lowcountry Highrollers traveled across South Carolina, to neighboring states and even to California for bouts. They are excited to get the team back together since the Women’s Flat Track Derby Association (WFTDA), the sport’s governing body, has allowed them to resume practice. Their priority is to rebuild after an almost two-year absence. They are in the process of recruiting new members and training for their first bout once the whistle blows in 2023.

Katie Knoll is 39 and known as Detroit Funk, or #313. She moved to Charleston from Detroit in 2008 for an electrical engineering position and warmer weather. She rented a place a block from the beach, and her roommate turned out to be one of the original members of the Lowcountry Highrollers. Knoll grew up figure skating and jumped at the opportunity to learn more about the team. “Skating comes naturally to me, and the strategy of the game captivates me,” she said. “The friendships I’ve made, adventures with the team and the strong amazing women I’ve met throughout the years have kept me committed to the sport and the team. I’m a lifer!”

Roller derby is, in many ways, unique and revolutionary. The sport prides itself on staying in the fray and outside the play-it-safe mainstream. Roller derby is radical, intense and loud in every sense of the word. No other women’s sport is growing and gaining notoriety as quickly as roller derby, even amid a pandemic. From allowing players to choose “boutfits” that reflect their personalities to creating an environment that accepts all women equally, roller derby is said to be for “every body.” Team members are urged to come as they are, push their limits, embrace their power and partake in a sisterhood that lifts each other up both on and off the track. It’s hard to think of a sport that showcases athleticism, self-love and inclusion any better.

Rebecca Imholz, Director of the Mount Pleasant Chamber of Commerce talks with host Brian Cleary about the 2nd Annual Dine Where You Live Campaign which is a proactive reaction by Mount Pleasant to … END_OF_DOCUMENT_TOKEN_TO_BE_REPLACED

For many of us, April 18 represents a looming and ominous deadline — Tax Day. Be it dread of the unknown, anxiety over how to navigate a complicated process, panic about penalties or stress about the … END_OF_DOCUMENT_TOKEN_TO_BE_REPLACED

Retiring from the fourth largest municipality in .the state of South Carolina after nearly 24 years of heading the Town of Mount Pleasant’s communications office is a momentous occasion for me. … END_OF_DOCUMENT_TOKEN_TO_BE_REPLACED