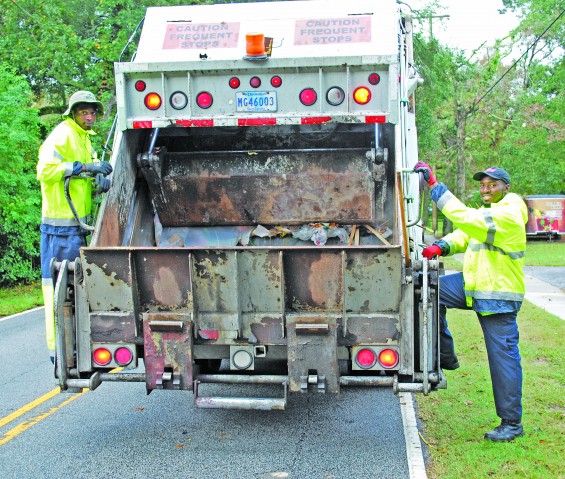 In communities great and small throughout this land, hosts of individuals and groups, both in the public and private sectors, labor tirelessly day in and day out to make our cities, towns, villages and hamlets work. These unsung heroes handle responsibilities we either cannot or choose not to handle for ourselves. In many instances, the men and women who perform these important functions are nameless and faceless to us, and, more often than not, they are barely noticed as they go about accomplishing their essential tasks.

One such group of behind-the-scenes heroes are the workers and supervisors of Mount Pleasant’s Sanitation Division. Under the overall supervision of Jody Peele, the town’s director of public services, and the direct oversight of Division Chief Dave Behrens, the 44 men – there have been women on the job but there are none presently – are responsible for collecting and disposing of the mountains of household trash, severed tree limbs, garden debris and miscellaneous refuse generated 365 days a year by households from Remley’s Point to Carolina Park.

During their work week, they roll out into the streets of Mount Pleasant armed with an array of sophisticated mechanized tools they use to rid local residents of just about everything they no longer need or want.

These frontline troops in the war against garbage consider themselves among America’s first responders – and with good reason. While they labor thanklessly through good weather and bad, they are truly appreciated when disaster strikes. Following a hurricane or other catastrophe, residents welcome policemen and firemen to restore civil order and deal with fires and collapsed buildings, but they rarely give much thought to the importance of removing rubble and garbage that would otherwise become sources of disease and impediments to the recovery process.

Sanitation workers perform one of the most perilous jobs in America, handling increasingly heavy loads daily and frequently dealing with hazardous materials. How dangerous is the job? The fatality rate is more than double that of police officers and sheriffs.

What’s the greatest danger to sanitation workers? The most common factor contributing to serious injuries and deaths isn’t the physical demands of the job or working around heavy equipment. It’s impatient drivers who pass garbage trucks on narrow roadways, unintentionally striking and injuring or even killing the orange-safety-vested men or women.

“There are definite dangers in working for the Sanitation Division, and every day I stress to my team the importance of safety,” Behrens said. “But every time I meet with my men, I also reinforce to them that, in many ways, they have one of the best jobs in the world.”

“They work outdoors,” he added, “and they get tremendous physical exercise.”

Not everyone is still at home when the trucks roll at 7 a.m. four days a week, but there’s no doubt that those who give it a moment’s thought truly appreciate the work done by the sanitation crews.

“Children are especially responsive,” Behrens said. “They’re fascinated by the noises and the action of the big trucks, and they wave and beg for a blast on their air horns.”

One mother, he said, asked her regular route men never be late because her young son refuses to get ready for school on trash day until the truck comes by.

Self-styled stay-at-home-mom Rebecca Bryant of Hamlin Plantation, who came out to greet her friends on their truck on a recent cold and rainy morning, perhaps exemplifies people who consider their sanitation crew to be “family.”

“They are awesome, just the best,” she said, adding that she, like many others she knows, is quick to offer the workers cold water on a steamy South Carolina day or some cookies or brownies baked especially for them.

It’s no surprise that sanitation workers are held in high regard by those of us who actually see them hard at work, although people generally have little idea exactly how they do their jobs. Behrens and his supervisors oversee skilled heavy equipment operators – who drive the trucks and also jump down to handle containers – as well as laborers, often spotted riding on the outside of the garbage truck. Their primary responsibility is retrieving containers and emptying them into the vehicles’ capacious hoppers.

In addition to these “typical” sanitation vehicles, Mount Pleasant operates two-man side-loaders, which can handle both sides of a street at each stop, boom trucks and the distinctive “claw machine,” which grasps and disposes of large, heavy roadside loads.

Each truck handles more than 700 residential stops each day, finishing every run with as much as 12 tons of trash that has been picked up, loaded and compressed by huge blades inside the vehicle’s bin. Its route finished, a truck heads to the Charleston County landfill.

Because of the nature of their contents and the rigorous outdoor work the trucks do, they are thoroughly washed and cleaned at least twice each week for hygienic reasons and so they can present a well-maintained appearance to town residents and visitors alike.

Behrens pointed out that if residents are disabled or have some other problem that keeps them from putting their containers out, the town’s sanitation workers will go out of their way to lend a helping hand.

Sanitation is a physically demanding, dirty, noisy, dangerous job that too often goes unappreciated simply because it’s so “routine” and efficient that it’s taken for granted. Yet the job is accomplished daily in Mount Pleasant by a team that operates with military precision and choreographed grace.

Mount Pleasant Sanitation is responsible for the brown refuse containers and the heaps of other discards people pile on their curbs, secure in the knowledge that at the end of collection day, they will be gone. Meanwhile, Charleston County deals with the blue containers designated for paper goods and other recyclables.

And you’re looking out your window on trash day and wondering whether your garbage has been picked up yet, look carefully at your brown container. If its handle is facing you, your trash is gone. If it’s facing the street, Mount Pleasant’s warriors of waste are on the way.
Story by Bill Farley.

Click, Listen, Watch & Learn. Doug Holmes, "The Stats Guy" crunches and studies statistics in many fashions including the MLS in Charleston talks with host and publisher Bill Macchio about the 2022 … END_OF_DOCUMENT_TOKEN_TO_BE_REPLACED

John Powell, CEO and President of the Southeastern Wildlife Exposition (SEWE) talks with host Brian Cleary about the expo's art show featuring local and regional artists, and Powell talks about other … END_OF_DOCUMENT_TOKEN_TO_BE_REPLACED

I’m sure you’ve heard the saying, “a picture is worth a thousand words” or “it takes a village.” Both of these popular expressions apply to the journey I recently embarked on, which culminated on … END_OF_DOCUMENT_TOKEN_TO_BE_REPLACED