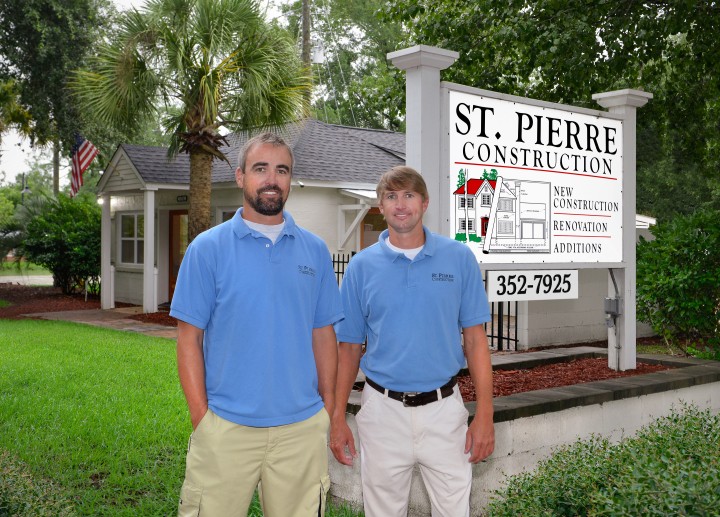 Once, in casual conversation at her Sullivan’s Island home, beloved best-selling author Dorothea Benton Frank described her sister to me as “someone you want to be in your bunker” – a person you’d want by your side should anything problematic ever happen. Now, years later, Dottie’s words keep flashing through my mind as I sit across from builders Jeff and Greg St. Pierre of St. Pierre Construction.

Born in Charleston and raised in Mount Pleasant, Jeff and Greg learned to earn their keep at a young age. Whether it was raking lawns or picking pecans in neighbor’s yards to sell door-to-door, the St. Pierre brothers worked hard growing up and – with guidance from their father, who founded Lawn Rangers landscaping with his boys and continues to run it to this day – became early entrepreneurs.

After graduating from Wando High School, Jeff and Greg decided to expand their landscaping services and encompass their other passion: building. They’d been borrowing their dad’s tools and crafting everything from tree forts to skateboard ramps in their Snee Farm backyard since they were kids, so segueing into the construction industry proved a natural transition.

Before forming St. Pierre Construction officially in 2001, the St. Pierre brothers padded their experience by picking up work from a well-established contractor on Sullivan’s Island. As their experience grew – along with the jobs being made available to them – Jeff and Greg hired carpenter Robert Gannon and hit the ground running framing custom homes.

Today, Gannon still works alongside Jeff and Greg, albeit in a different capacity – he was promoted to head foreman only two years after joining the company, and he maintains the position still. In addition to Gannon, 22 other employees and six crews comprise this local construction company.

Jeff and Greg take pride in the company’s commitment to coming in on time, on budget and in a manner keeping with the integrity tied to their family name. And because the Lowcountry has and always will be home to the St. Pierre brothers, they feel honored to have assisted local homeowners through some of the most trying times in recent history for the Charleston area.

When Hugo hit, they helped rebuild their father’s business. They picked up the family home that had been torn apart and blown into a nearby lake. They pitched in to lend neighbors a hand rebuilding their homes, too.

When the economy fell out in 2008 and the housing market was hit especially hard, the local construction community all but became a ghost town. Many builders essentially packed it in, exploring other trades or simply moving on to somewhere new. Jeff and Greg stuck it out, though, even when their crew dropped from more than 20 to only three.

The brothers went from shelving their tool belts and running a large crew for several years to literally trudging through the mud. They strapped their tool belts back on, persevered and built their business back from the ground up.

Where others have come and gone, capitalizing on the ebb and flow of our city’s economic booms, the St. Pierre brothers have stayed put. They were born here; they grew up here; they’re raising their families here. Respect for others and pride in their work was deeply ingrained during Jeff and Greg’s formative years and, as such, they stand behind what they’re doing. Should they build your house today and find out you need something fixed 20 years down the road, they’ll still be here – and they’d be happy to help you out.

So, yes, Jeff and Greg St. Pierre are the kind of guys you want in your bunker. Because, ultimately, what it all boils down to is loyalty – who’ll have your back for the long haul.

To consult with Jeff and Greg on your construction needs, call St. Pierre Construction at 843-352-7925 or visit StPierreConst.com.

For many of us, April 18 represents a looming and ominous deadline — Tax Day. Be it dread of the unknown, anxiety over how to navigate a complicated process, panic about penalties or stress about the … END_OF_DOCUMENT_TOKEN_TO_BE_REPLACED

Retiring from the fourth largest municipality in .the state of South Carolina after nearly 24 years of heading the Town of Mount Pleasant’s communications office is a momentous occasion for me. … END_OF_DOCUMENT_TOKEN_TO_BE_REPLACED

Perhaps you’ve noticed it as you’ve turned off Highway 17 onto Mathis Ferry Road, just past the first traffic circle. More likely than not, you haven’t paid it much attention. But that’s about to … END_OF_DOCUMENT_TOKEN_TO_BE_REPLACED