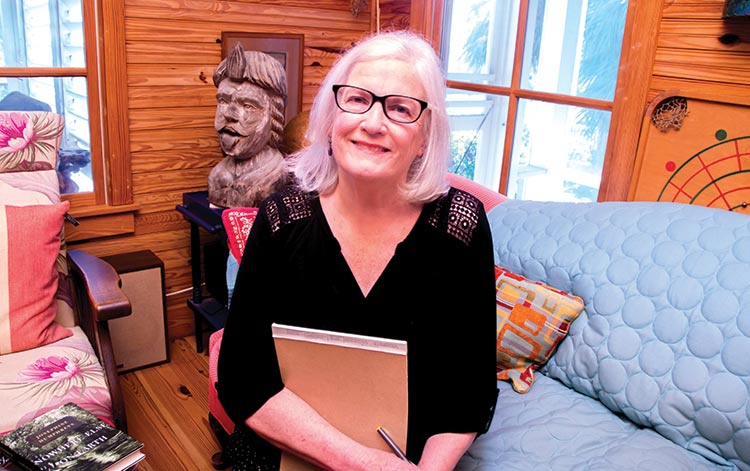 Once upon a time, a young Josephine Humphreys plucked her first volume of literature from the family bookshelf – perhaps Greek mythology, perhaps short stories by Faulkner – and tucked it under her arm. Though she wasn’t even 8 years old and had no inkling of one day becoming a writer, Josephine felt drawn to the heady literature, the “only books in the house.”

“My family didn’t read a lot of fiction and poetry, but we valued books,” she remembered.

Having exhausted the household collection by her 8th birthday, Josephine’s next literary frontier was the public library in downtown Charleston, which was located in one of the current cast homes from the television hit “Southern Charm.” After becoming enchanted with the vast selection of books, library trips became a Wednesday ritual for the family. Reading, in fact, became a primary source of entertainment.

Right around that same time, Josephine leaped from her growing love of books into a love for writing in a remarkable way – that is, by accident. After “failing” (her words) at a number of extracurricular activities her grandmother felt were honorable for a young girl – painting, piano, ballet, tap dancing and acting at the Dock Street Theatre – it was decided that Josephine should write short stories and poems.

“I wrote a couple of stories and gave them to my grandmother, who went nuts for them,” she reminisced.

“A lot of it was about her mother,” Josephine explained. “My grandmother could not spell, but boy could she write!”

After declaring that she would one day become a writer, Josephine absorbed herself into the process, noting the teachers and mentors who inspired her from her earliest years at Crafts Elementary, Memminger and eventually Ashley Hall for high school, where she had four “brilliant” English teachers as well as a literary magazine to work on with fellow students who were interested in writing.

“I knew at least four people who were geniuses,” she mused. “And they were unusual people – different from most teenagers. It was inspiring.” 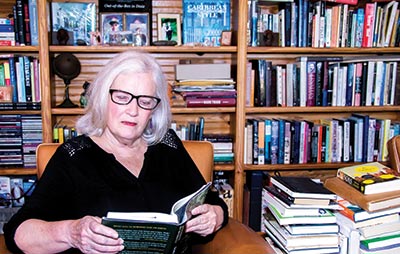 Josephine ended up at Duke for her undergraduate years, which she loved. In fact, she’d read an article in Seventeen about the writer Reynolds Price teaching at the University. Having read and loved his novels, she wanted to be his student. Getting accepted into his elite writing class was her first major success as a student of literature.

“You had to audition to be in the class,” she explained. “I went into a giant hall of 300 people. There was a writing prompt on the board, and we had to finish the story.”

Overall, the four years at Duke were rewarding. Another teacher and great writer, William Blackburn, hoped that Josephine would get a scholarship; instead, she enrolled in the graduate program at Yale University. But when she married Tom Hutcheson, those plans were cut short. Connecticut was freezing, and the couple decided to head back south.

Like so many writers, Josephine tried her hand at teaching college courses for seven years at Charleston Southern before she figured out in 1979 that it was time to quit and devote the whole of herself to writing. It was a “slow start,” she said, working on her first novel,“Dreams of Sleep.” Nevertheless, she decided writing rather than teaching was her calling.

And how, exactly, did Josephine get her book into the correct publisher’s hands? It happened with the help of good connections – namely her old friend Reynolds Price. She sent him three chapters of the “Dreams of Sleep” manuscript right after it was completed.

“He loved it and sent it to his agent,” she said. “Back then, in 1984, you had to have an agent. And the publishing company did all the marketing.”

Josephine said her advice for budding women writers in 2017 and beyond would differ according to the writer’s personal goals.

“It depends on whether you want to be successful or simply fill your heart,” she pointed out. “To be successful, read a lot – and read the kind of book you’d like to publish. Handbooks can be helpful, too.”

The nuts and bolts of writing and publishing aside, however, Josephine believes that crafting a work of fiction “can be like dreaming, and that the creative process is sometimes unexplainable.”

“With art, the art is somewhat in control,” she said. “You, the artist, are not completely in control – you become another part of the process. If you overthink anything, it comes out unnatural.”

Josephine added that when she first declared at age 8 her intentions to become a writer, she did not know there would be “so many hurdles.” And though putting her all into each novel or story she writes and marketing it to the right readers is certainly her occupation, she considers it more of a love.

“I don’t like to think of it as a business,” she admitted.

People are drawn to the Lowcountry in large part because of the beaches, the salt marshes, the moss-draped oaks, the cypress swamps — the stunning natural landscapes that inspire awe and support an … END_OF_DOCUMENT_TOKEN_TO_BE_REPLACED

Click, Listen, Watch & Learn. Doug Holmes, "The Stats Guy" crunches and studies statistics in many fashions including the MLS in Charleston talks with host and publisher Bill Macchio about the … END_OF_DOCUMENT_TOKEN_TO_BE_REPLACED

John Powell, CEO and President of the Southeastern Wildlife Exposition (SEWE) talks with host Brian Cleary about the expo's art show featuring local and regional artists, and Powell talks about other … END_OF_DOCUMENT_TOKEN_TO_BE_REPLACED