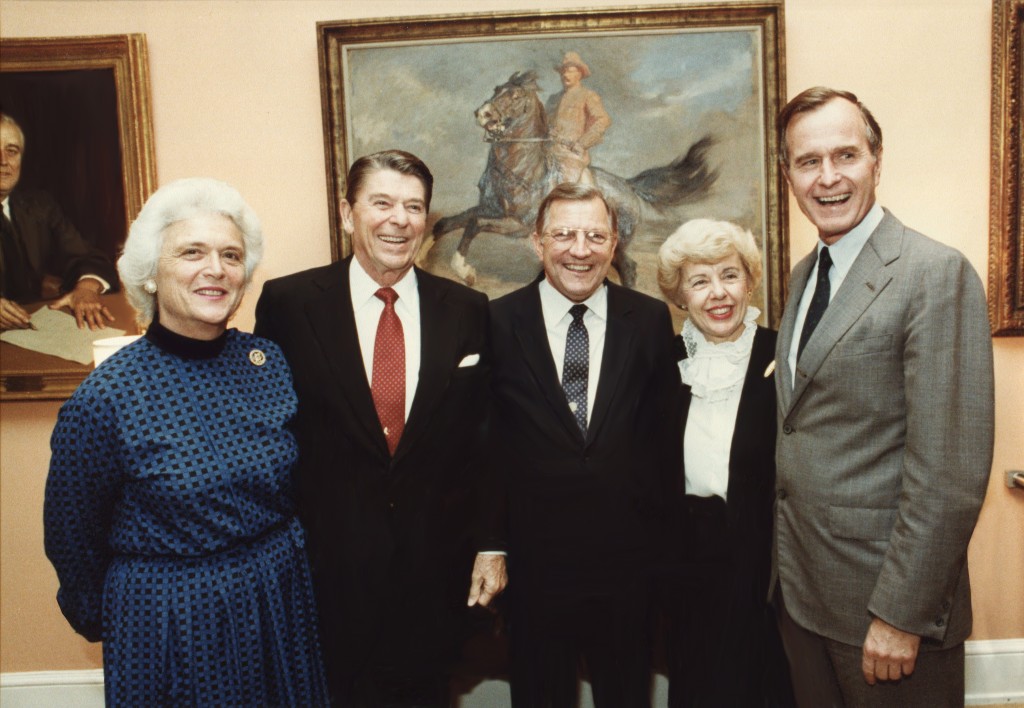 If you live in Mount Pleasant, you’ve come across the Edwards name: James B. Edwards Elementary School and Ann Edwards Lane. Travel to downtown Charleston, and, on the campus of the Medical University of South Carolina, you might encounter the James B. Edwards College of Dental Medicine.

In the Old Village of Mount Pleasant, on a bluff overlooking the Charleston Harbor, sits a large white house with a red metal roof. The sign at the entrance, “O Be Joyful,” is not just a message from the homeowners – it is the way Ann and Jim Edwards have lived what they call “a wonderful life.” And what a life it has been!

During Edwards’ tenure as governor of South Carolina and then secretary of energy under President Ronald Reagan, the couple met many of the eminent politicians of the latter part of the 20th century. The back hall of their home serves as a photo gallery of presidents and other leaders they’ve known.

Ask Edwards about the nicest president, and he answers with enthusiasm and without hesitation: “President Reagan!” What about Richard Nixon? “He was a good friend and the second smartest man I ever met.” The smartest, he said, was the king of Morocco.

The home, reportedly the second oldest in Mount Pleasant, is located at the foot of Venning Street. The property, originally part of Andrew Hibben’s estate, was sold in 1791 to Elias Venning, who built the house sometime prior to 1809.

“We heard the woman who owned it was planning to sell,” Mrs. Edwards explained. “So we called on her often, telling her of our interest.”

The former governor continued the story: “She wasn’t sure about selling, so we kept visiting her. When we did, she served us a drink she called “O Be Joyful” – hence the name of our home.”

The Edwards’ purchased the home in 1974 but didn’t move in until 1979, following his term as governor.

“During one of our visits to the house, our daughter Catharine started a fire in one of the bedroom fireplaces and immediately the house filled with smoke,” Mrs. Edwards laughed, recalling the story. “Thankfully, the fire department was here in minutes. They said not to use the fireplaces.”

Today, Mrs. Edwards flips a switch alongside the fireplace in the living room, creating a perfect gas fire. Bookcases line the walls of this room, the shelves filled with books about the history of South Carolina and lifelong mementos. The windows frame a magnificent view of the nearby harbor.

In recent years, an extension was built off the rear of the home, adding a large modern kitchen. The former governor explained that he, and not Mrs. Edwards, is the proud proprietor of this kitchen. He proudly pointed to a handsome table that seats 10 comfortably.

“The kitchen table was always the most important part of our home,” he explained. “This is where we gathered to eat, to play games and hold important discussions. When I couldn’t find the right table, I made this one.”

He also built a 16-foot boat for himself.

When the Edwards’ recite their life stories, their affection for each other is evident. She has been an active partner in their journey together. When the couple and their children, James Jr. and Catharine, moved to Columbia, she wanted to learn more about the governor’s mansion. To her surprise, there was little information about their new home. So, with the help of four historians, she wrote “The Governor’s Mansion of the Palmetto State,” which was published in 1978. A former nurse, she was honored in 2006 when MUSC established the Ann Darlington Edwards Endowed Chair of Nursing.

Early in their journey, when they first met, they both were residents of the Old Village, Mrs. Edwards actually living next door to their current home. They dated as youngsters, and Edwards recalled the first time they got together.

“A group of us went over to the theater at Fort Moultrie on Sullivan’s Island. The movie cost 15 cents,” he said.

Mrs. Edwards’ father was an engineer, and, with the outbreak of World War II, her family moved to Washington, D.C. Following the war, while serving in the Merchant Marine, Edwards was loading a jeep onto a transport ship in Le Havre, France, when an army captain began shouting instructions. There was something familiar about the man, so Edwards approached him and asked his name. Taken back by the forward young sailor, the captain demanded to know his name.

“I dated your sister. Tell her Jim Edwards said hello,” was his response. And the two reconnected.

When Edwards, the first Republican governor of South Carolina in nearly a century when he took office in 1975, talked about his life and the many roles he has played, he joked, “I couldn’t hold a job very long.” Mention the Medical University of South Carolina, where he served as president for 17 years, retiring in 1999, and he smiles, “I loved that job.”

In recent years the pace has slowed for Ann and Jim. For the most part, James Burrows Edwards, former Merchant Marine, Navy dentist, oral surgeon, state senator, governor, cabinet member and university president, spends joy-filled days enjoying views of the Charleston Harbor from the comfort of his front porch.

1950 – Bachelor of Science, College of Charleston

2008 – Inducted into the South Carolina Hall of Fame

Photos Courtesy of the Edwards Family

People are drawn to the Lowcountry in large part because of the beaches, the salt marshes, the moss-draped oaks, the cypress swamps — the stunning natural landscapes that inspire awe and support an … END_OF_DOCUMENT_TOKEN_TO_BE_REPLACED

Click, Listen, Watch & Learn. Doug Holmes, "The Stats Guy" crunches and studies statistics in many fashions including the MLS in Charleston talks with host and publisher Bill Macchio about the … END_OF_DOCUMENT_TOKEN_TO_BE_REPLACED

John Powell, CEO and President of the Southeastern Wildlife Exposition (SEWE) talks with host Brian Cleary about the expo's art show featuring local and regional artists, and Powell talks about other … END_OF_DOCUMENT_TOKEN_TO_BE_REPLACED